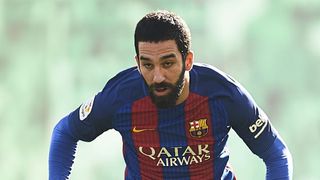 Arda Turan could be heading for the exit at Barcelona with his agent revealing he is in talks with "several clubs" about a January transfer.

Turkey international Arda played a bit-part role over the past two seasons and is yet to make an appearance since Ernesto Valverde took over as head coach.

The midfielder has long been linked with a switch to Arsenal, though a return to the Super Lig with Trabzonspor has also been mooted.

Arda's agent Ahmet Bulut is attempting to arrange a mid-season move for his client, but emphasised he will be content to stay at Barca and take his chances if no deal is struck.

"We're troubled with Arda's situation. He didn't even get to play 10 minutes," Bulut told TRT Spor.

"We respect Ernesto Valverde but I can't understand how can he assess a player whom he doesn't put on the field.

"I'm having talks with several clubs regarding Arda but I can't name any of them. I'm trying to wrap this up by January but if we can't reach an agreement with any of the teams, he'll stay at Barca.

"Arda scored 13 goals when Neymar was away injured. He plays hard when he gets a chance."