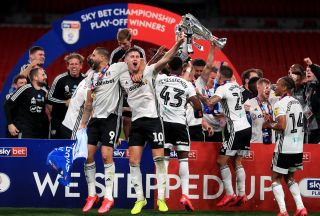 Fulham chairman Shahid Khan has pledged not to repeat the mistakes of the past and build on a squad which “bled, battled and sacrificed” to win promotion back to the Premier League.

The Cottagers beat Brentford after extra-time at Wembley on Tuesday night to win the Sky Bet Championship final and secure a return to the top flight at the first time of asking.

After going up via the same route in 2018, the west London club spent more than £100m on summer recruits, only to drop straight back down.

Khan, though, stressed while Scott Parker’s group is to be strengthened, it would only be for the right player to maintain the current team spirit.

In an open letter to Fulham supporters on the club website, Khan said: “Finally, a word on the subject of team. Be assured that we will be a team, in its truest sense, moving forward.

“We will be unafraid to improve and add pieces to our lineup, but not at the expense of the spirit and soul of a squad that bled, battled and sacrificed to return Fulham to the Premier League.

“Building a squad can be a tricky proposition for a newly promoted club, and that is especially true this year with the start of the season already nearly upon us.

“Turnover in football is inevitable. But, this club has Premier League experience and our players, as well as our young and promising head coach, love Fulham Football Club.

“There is a lot to like in this team today, and just as much to like in our future.”

Khan also paid tribute to the club’s supporters, who were not able to share in their team’s success at Wembley.

“What I don’t specifically know is how this global health crisis has affected, personally or professionally, everyone else who stands with this club for life,” said Khan, who had to stay in the United States because of the coronavirus travel restrictions.

“I imagine there have been hardships, moments of frustration and maybe even sadness, and for that I empathise.

“Yet, you’ve continued to make Fulham Football Club an essential part of your life, giving us all you have. I am impressed, humbled and in your debt.”