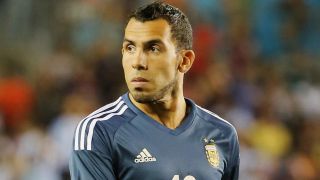 Shanghai Shenhua claim that a recent Carlos Tevez interview with a French media outlet was "taken grossly out of context" after the Argentinian was quoted as saying Chinese players were not "technically skilled".

Tevez has endured an underwhelming start to life in the Chinese Super League and was recently criticised for being overweight by his coach Wu Jingui.

His stay seemed to take another twist on Thursday when he was quoted blasting the standard of football in China, saying that the nation will not be able to compete globally "even in 50 years".

But his club have leapt to the defence of Tevez, insisting that his comments have been blown out of proportion and "distorted".

"The language used by the French media is misleading and cynical, which distorted the meaning of Tevez's words," Shanghai Shenhua said in a media release.

"Tevez said he had not watched the video footage of the interview and its subtitles yet, but the headline led us to believe that the interview are being exaggerated and blown out of proportion.

"Tevez's comments were taken grossly out of context. He has clarified to the club that he has no intention of disparaging Chinese football and Chinese players.