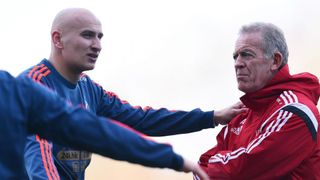 Jonjo Shelvey wants to stay at Swansea City despite talk of a move to Premier League rivals Newcastle United, according to manager Alan Curtis.

Shelvey was in the starting XI on Sunday as Swansea crashed out of the FA Cup with a 3-2 loss to League Two Oxford United.

The midfielder has fallen out of favour at the Liberty Stadium and reports have suggested Newcastle are hoping to agree a £10million deal for the England international.

Shelvey was also reported to have become involved in an altercation with supporters following the final whistle, but Curtis told Sky Sports: "There's always speculation.

"Because he's not in the Premiership side and he's an England international, there's always going to be speculation about Jonjo. He wants to stay."

Swansea took the lead at the Kassam Stadium thanks to Jefferson Montero's 23rd-minute strike. However, a Liam Sercombe penalty and a brace for Kemar Roofe - also a reported Newcastle target - put Oxford in command.

Bafetimbi Gomis pulled one back but Swansea could not find the net again to force a replay as Oxford held on.

Asked if their exit was a blessing in disguise for a team just two points above the Premier League relegation zone, Curtis said: "Well it could be, I've got to be honest I'd love to have gone a little bit further. It just breeds confidence.

"Some of them probably lack a bit of match hardness. [It was] disappointing, we have to do better."