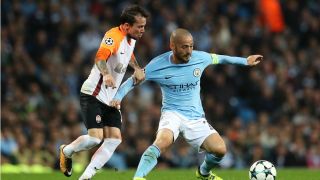 David Silva wants a new contract at Manchester City and an answer to his Champions League prayers.

Silva joined City from Valencia in 2010 and has won every major honour in English football during his time at the Etihad Stadium, including Premier League titles in 2011-12 and 2013-14.

The Spain playmaker has been typically influential in Pep Guardiola's side winning nine of their opening 10 top-flight matches this term to set the early pace in the Premier League.

City face Napoli on Wednesday with three victories from as many Champions League matches – their best ever start to a campaign in Europe's top competition, where Silva and his colleagues have not always found the going so agreeable.

The 31-year-old - a world and two-time European champion at international level - is in discussions over extending his City contract, which expires at the end of the 2018-19 campaign and has appealed to a higher power over a remaining burning career ambition.

"We are still talking. I hope that I can sign soon because I want to be here to play for City for 10 years," Silva told a pre-match news conference in Naples.

"I pray every night to win the Champions League with City."

Napoli's imposing Stadio San Paolo does not hold fond memories for Silva, who was part of the City side beaten 2-1 at the ground in November 2011 – a result that contributed to Roberto Mancini's side being knocked out in the group stages.

"I hope we can change that [feeling] tomorrow," he said. "We feel very confident because everyone in the team always knows what to do on the pitch, we are really playing great football.

"We are creating lot of chances and scoring plenty of goals. I think this is the best City team I have played in."

Diminutive in stature and rarely a player put forward for media appearances, Silva has taken the captain's armband at City in the absence of the injured Vincent Kompany and Guardiola insists his influence over the dressing room is beyond question.

"Here at the press conference he is a little bit shy but he goes on the pitch and he is a huge personality," the manager said.

"You need players who are good with the ball to play in the middle and David is a master at that. He's a legend for this club."