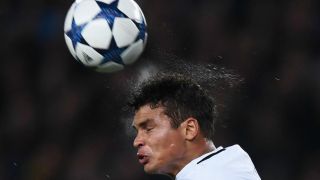 Paris Saint-Germain captain Thiago Silva believes it would be "catastrophic" for his team to finish third in Ligue 1 after their title hopes were dealt a severe blow on Sunday.

PSG have won the Ligue 1 title four years in a row but a 3-1 loss at Nice - in which Thiago Motta and Angel Di Maria were sent off - leaves them three points behind leaders Monaco, who have a game in hand.

Ligue 1 only has two automatic Champions League qualification places and with Nice closing to just three points behind PSG, Silva accepted his side have a battle to finish second with the title out of reach.

"We have lost and the result must be digested," Silva said. "We now have to look ahead and win the last three games we have left to finish second, because third place would be catastrophic for us.

"Mathematically, [the league] is not finished but it is almost impossible. We have to finish the three matches that remain and especially win the final of the Coupe de France.

"You have to finish as best as possible as this year has been a bit difficult for us."

Motta was dismissed for a headbutt on Paul Baysse and a reckless lunge on Arnaud Souquet saw Di Maria sent off, with PSG president Nasser Al-Khelaifi hitting out at referee Ruddy Buquet.

"If we want to improve French football, let's improve the refereeing because it was a nightmare," he told reporters. "It is not normal.

"I do not say that we lost because of him but if we want a championship of a high level, we must change the officiating.

"I do not think of the two red cards, nor of this match, I speak in general. If we do not have enough French referees in the World Cup, it is not for no reason."

Silva agreed with the club president's assertion that the dismissals were of a questionable nature.

"The red cards were a consequence of the match," the Brazilian added. "It's difficult to speak about the refereeing, but it's true it was a little complicated.

"We're not going to excuse our defeat on the referee, although the red cards were a little much.

"Nice posed us many difficulties, especially in the first half. They played very well. We controlled the second half. I think we deserved a better result, but football is like that."