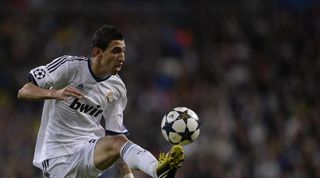 Di Maria has been consistently linked with a switch away from Madrid during the close-season, with the likes of Manchester United and Paris Saint-Germain said to be interested in the Argentina winger.

But he feels Atletico's chances would be greatly boosted if Real – who can call on the likes of Cristiano Ronaldo, Gareth Bale and James Rodriguez – sold Di Maria.

Speaking after the first leg of Supercopa de Espana, which finished 1-1 at the Santiago Bernabeu, Simeone thought the introduction of Di Maria – a 78th-minute substitute – swung the game Real's way.

"The game changed with Di Maria," Simeone told AS.

"It's logical – he's the best player they have.

"He's the most dominant player in pushing the play up the pitch."