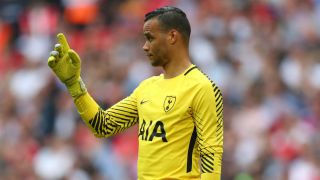 Michel Vorm admitted to having no real understanding of why Tottenham appear unable to "take that last step" after their latest failure to secure silverware.

In that time, Spurs have established themselves as regular top-four contenders, but the lack of honours remains a taxing issue and not one goalkeeper Vorm can readily explain.

"It's a tough one. I don't know if it's luck or just a little step, you know? It's hard. It's hard to say 'this is it'," said the Dutchman after being beaten by efforts from Alexis Sanchez and Ander Herrera, which eclipsed Dele Alli's opener at Wembley.

"I think we showed against the [likes of] Real Madrid and all the other games that we can do it.

"But like [in this game against United] or against Juve, these are the moments that, yes, we're playing well, but we can't just take that last step.

"But I just can't say 'this is it'. It's just devastating, to be honest.

"We are close but so far away."

FULL-TIME: United come from behind at Wembley to book their place in the FA Cup final. April 21, 2018

The 34-year-old, who received some criticism for his showing, revealed how hard Spurs had taken the loss, but urged his team-mates to use the pain as fuel.

"I think if you see in the dressing room, it's a mess," he said. "It sounds a bit cliched maybe, but we need to learn from this as well and I still believe that there's so much more to come for us.

"It just takes time. At the moment, it's hard to believe, but we need to keep on going, keep on pushing, working and learning from these kinds of games.

"Because at the end it's about reaching these finals and trying to win something.

"I definitely believe that we can do better than this with this group."