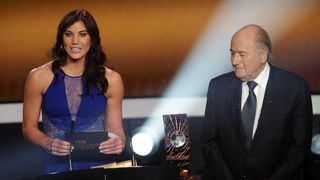 Former United States goalkeeper Hope Solo has accused Sepp Blatter of sexually assaulting her at the Ballon d'Or awards ceremony in January 2013, a claim the ex-FIFA president's spokesman has described as "ridiculous".

In an interview with Portuguese newspaper Expresso, Solo said she "had Sepp Blatter grab my ass" before going on stage with the Swiss to present the FIFA Women's Player of the Year award for 2012 to USA team-mate Abby Wambach.

Blatter has denied the accusation, with his spokesman telling The Guardian: "This allegation is ridiculous."

Asked by Expresso whether, in light of recent revelations in the American entertainment industry, sexual harassment was an issue in women's football, Solo replied: "Of course it is.

"I've seen it throughout my entire career and I wish more female athletes would speak out about their own experiences. It's not just in Hollywood, it's probably all over the place.

"I've seen it in sports. I don't know why more players don't speak out."

Solo continued: "I had Sepp Blatter grab my ass. It was at the Ballon d'Or, right before I went on stage… it [sexual harassment] has been normalised."

The 36-year-old expanded on the alleged incident when she told The Guardian: "I was in shock and completely thrown off.

"I had to quickly pull myself together to present my team-mate with the biggest award of her career and celebrate with her in that moment, so I completely shifted my focus to Abby."

She added: "While in this instance it was Sepp Blatter, who was the most powerful man in football at the time, sexual harassment and inappropriate behaviour are rampant at every level in women’s sport and it needs to stop."

Solo is the United States' record appearance-maker with 202 caps but was handed a six-month suspension by her national federation after branding Sweden's players "a bunch of cowards" in the aftermath of her team's 2016 Olympic quarter-final defeat on penalties.

Blatter, 81, was FIFA president from 1998 until 2015, when he was banned in relation to a payment of two million Swiss francs (€1.7m) to former UEFA chief Michel Platini.