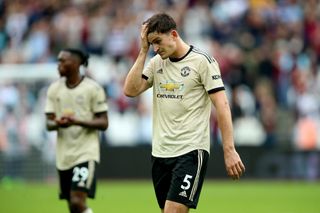 Ole Gunnar Solskjaer insists his young Manchester United squad have the stomach for a fight, but just lack the ringcraft.

United slipped to a demoralising 2-0 defeat at West Ham, stretching their winless run on the road to seven Premier League matches.

They also face an anxious wait for the results of a scan on Marcus Rashford’s groin after their last striker standing limped off.

It was a lifeless display at the London Stadium, but Solskjaer maintained: “It’s a good group to work with, they are determined.

“Sometimes along the road you’re going to hit some bumps. This group is determined, they showed the desire we want. There’s a good atmosphere in the dressing room and they’ve got their focus right.

“This group want to do what we are trying to do, we are working in training. There are key moments in games that can tip games in our favour.

“It might be a bad decision on a pass. But the attitude and desire is there. That’s not the problem, it’s the quality in our decision making and execution.”

“All of us know Manchester United are one of the biggest teams in the Premier League,” said Hammers boss Manuel Pellegrini.

“They are always close to fighting for the title or for the Champions League spots.

“I think the season is just starting, they have a manager that knows the club very well, he did well last season – but on Sunday we did better than them.”