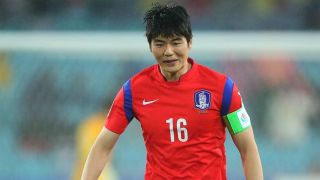 South Korea breezed to a 3-0 friendly victory over Jamaica on Tuesday as they warmed up for next month's World Cup qualifiers in impressive style.

Ji Dong-won's ninth goal for his country broke the deadlock on 35 minutes and Hwang Ui-jo hit the crossbar moments later as the home side dictated proceedings in Seoul.

A penalty from Ki Sung-yueng doubled the advantage 10 minutes into the second half and Hwang's calm finish made it three shortly after the hour.

Jamaica sat deep and tried to hit Korea on the break but Uli Stielike's side controlled the game throughout, and they now head into Asian section qualifiers against Myanmar and Laos in November in confident mood.

Han Kook-young flashed an early shot wide and Deshorn Brown's strong run brought the first save of the match from Jung Sung-ryong in a bright opening 10 minutes, and Ki should really have done better when he fired a half-volley straight against Adrian Mariappa from just eight yards out.

Ji twice tested Andre Blake with a low strike after cutting in from the left and Ki curled over after a good one-two with Lee Jae-sung as Korea continued to look the more likely to break the deadlock.

And Augsburg forward Ji finally opened the scoring 10 minutes prior to the interval, heading a corner into the far side of the net from inside the six-yard box, with Blake nowhere near the cross.

Hwang was close to doubling the lead before the break as he rattled the bar with a curling strike, and Lee spurned a glorious chance right after half time as he headed Ki's cross straight into Blake's arms from point-blank range.

Korea finally scored their second with just under an hour played. Ji went down in the area under minimal contact from Shaun Cummings and Ki struck the penalty firmly into the bottom-left corner.

Giles Barnes had Jung worried with a fizzing low shot from 20 yards which went just wide, but Jamaica were punished for conceding possession at the back as Hwang's clever dummy and composed finish added a third after Ji's shot was saved.

Blake's quick reactions denied Ji from close range to keep the scoreline down and Kim Jin-su almost capped a fine display at left-back with a goal, but he sent his effort narrowly past the far post.

Jamaica became more adventurous in the closing stages as they sought a consolation but Korea closed out the match with relative ease.