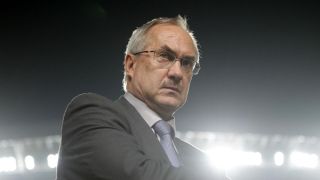 Uli Stielike's South Korea will go five points clear at the top of Group G with victory over Myanmar on Thursday in their penultimate outing of 2015.

South Korea are yet to concede a goal in World Cup qualifying and have lost just once in all matches this year, with Stielike guiding his side to the final of the Asian Cup before winning the East Asian Cup.

While Hong Jeong-ho is ruled out through injury, Stielike can call on Son Heung-min and Lee Chung-yong in Suwon after their return to fitness.

"If Son Heung-min wasn't 100 per cent recovered his club team would have said something to us," Stielike said in relation to concerns over the Tottenham striker's fitness.

"Both the national team and his club team are monitoring his condition. I wouldn't have picked Son Heung-min if I didn't think he couldn't play against Myanmar. I called up Son and Lee Chung-yong thinking about the long-term view.

"Next March we will play Lebanon in qualifying. At that time the K-League players will just be starting their season.

"I firmly believe that even if Son Heung-min and Lee Chung-yong can't give 100 per cent now, they will repay our faith with good performances next March."

With four points from five matches, Myanmar's remaining hope is to reach the Asian Cup qualifying third round as they seek to gain a measure of revenge for their 2-0 defeat in June's reverse fixture.

Son and Lee Jae-sung were on target in Bangkok and Stielike urged his players to maintain their form ahead of their final qualifiers in March.

"On the whole we've done well this year but the national team is not simply the 23 players here now," he added.

"It's about 35-40 players. It's a good thing if the national player pool is large. I think it's one of the most important points of this national team.

"They can't be content with where they are now. Competitiveness is very important to us over the long-term."

Myanmar's one win in Group G came in their last outing, a 3-1 triumph over Laos as Suan Lam Mang, Kyaw Ko Ko and Aung Thu were on the scoresheet.