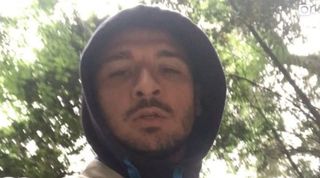 Spartak Moscow won the Russian Premier League title for the first time since 2001 this season, and their Italian defender Bocchetti had promised he would hike from Moscow to his home city of Naples should they win the league.

Bocchetti made his bold claim after just 17 matches but Spartak did indeed win the league, so off he has gone on his travels – as confirmed by his wife, who said her husband had set foot to Italy.

“Don’t worry, Salva thought everything through a while ago and will begin. He is a man of action, and not of words,” she said.

By foot, the journey should take around 23 days and means travelling through Belarus, Ukraine, Hungary, Serbia, Bosnia and Herzegovina and Croatia, then getting across the Adriatic Sea.

Nevertheless, just three days on from Spartak's 3-0 loss to Arsenal Tula, Bocchetti posted a video of himself on Instagram walking in the woods.

He says: "Hello, do not worry, I am almost home!" winking more than once. We hope he's got some good shoes.