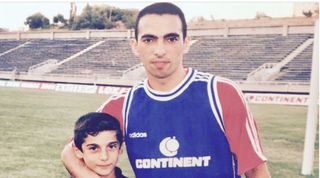 On Wednesday night, Mhkitaryan acrobatically poked in Manchester United's second goal against Ajax before lifting his first ever European title, a feat he failed to achieve at Shakhtar Donetsk or Borussia Dortmund.

So, to congratulate United's creative midfielder for his Europa League achievement via Twitter, Djorkaeff posted an old photo of him with a mini Mkhitaryan, alledging that the now-Manchester United man told him that he too would win a European trophy one day.

All together now: "Awwwwwww..."