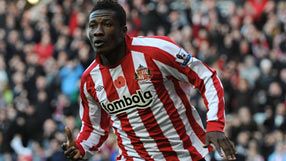 Spurs followed up that memorable victory by losing 4-2 to Bolton Wanderers on Saturday and their hopes of edging back towards the top four were further hampered by Steve Bruce's Sunderland.

The hosts started well and Tom Huddlestone crashed an early shot against a post.

Spurs though could not find a way through until the 64th minute when Gareth Bale, destroyer-in-chief against Inter, crossed for Peter Crouch to nod the ball down for Rafael van der Vaart to score his seventh goal of the season.

The lead lasted only three minutes as a defensive mix-up between Younes Kaboul and William Gallas allowed Asamoah Gyan to nip in for the equaliser.

Spurs and Sunderland started the day side by side in seventh and eighth positions on 15 points and ended it one point and one place better off.

The night's other match was full of action as Birmingham City, 2-0 down at Stoke City, fought back to 2-2 for the second time in four days only for the hosts to snatch a winner after four successive league defeats.

Birmingham, who rallied to earn a 2-2 draw against West Ham United on Saturday, did so again with two goals in two minutes by Keith Fahey and Cameron Jerome.

Dean Whitehead then seized on some ragged defending to bundle in Stoke's winner five minutes from time.

The rest of the Premier League are in action on Wednesday with Manchester City's game against Manchester United the pick of the fixtures.