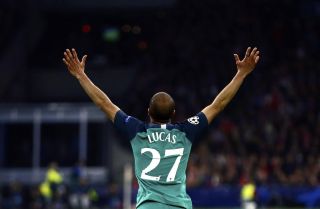 Spurs were dead and buried at half-time in the second leg at the Johan Cryuff ArenA as they trailed the Amsterdam 2-0 on the night and 3-0 on aggregate after goals from Matthijs De Ligt and Hakim Ziyech.

However, a miraculous comeback, spearheaded by Moura, was completed deep into added time when the Brazilian slotted home a loose ball to spark amazing scenes in Amsterdam.

It continues the remarkable progress for Spurs under boss Mauricio Pochettino, who has led the club further in Europe than any other.

Jurgen Klopp’s men may have thought their name was on the trophy after the manner of their comeback against Barcelona, but Spurs will have other ideas and it promises to be a brilliant spectacle in Madrid on June 1.

For Ajax, a brilliant run in this competition, where they beat Real Madrid and Juventus in previous rounds, ended in the most heartbreaking of ways and with their side set to be picked apart in the summer, they are unlikely to have a better chance of winning European football’s premier club competition than this.

Spurs knew they did not have history on their side as only one of the 17 teams who lost the first leg of a European Cup semi-final at home had gone on to progress to the final.

Pochettino said on the eve of the game that he would speak from the heart before kick-off, delivering a team talk to rouse his men.

Whatever he said did not prevent them conceding a goal inside the opening five minutes.

Ajax started the first leg brilliantly – and they were again at it from the off.

Dusan Tadic brought a flying one-handed save out of Hugo Lloris and Spurs could not survive the resulting corner, with the unmarked De Ligt finding the corner of the net with a powerful header.

Disappointing as the start was, it did not alter the equation for Spurs if they wanted to go through after 90 minutes.

They still had to score two goals and they had chances as Son Heung-min hit the post, then brought a save out of Andre Onana.

Christian Eriksen missed the best of the chances when he fired straight at the Ajax goalkeeper after a darting run by Moura.

Any hopes Spurs had appeared to be extinguished in the 36th minute as Ajax doubled their lead on the night.

Some shoddy defending from Kieran Trippier allowed the hosts in down the left and Tadic cut back for Ziyech, who whipped a brilliant first-time finish into the top corner.

Spurs had to go for it after the break and Pochettino brought on Fernando Llorente on at the interval – and they found hope.

Dele Alli had already brought a fine stop out of Onana by the time they got on the scoresheet in the 55th minute.

Danny Rose started it with a nutmeg and then set Alli free, with Moura running on to the ball to stroke home.

Four minutes later it was 2-2 as Moura bagged his second, showing skill and composure to find the net after Llorente was denied from point-blank range.

Sensing something special was possible Spurs, with Ajax rocked, looked a threat every time they went forward.

Ziyech drifted an effort just wide and then crashed the ball against the post, before Jan Vertonghen hit the crossbar from six yards.

That looked like being Spurs’ last chance until the dying seconds, when Moura ran on to Alli’s through-ball to send Spurs into ecstasy and, more importantly, to Madrid.