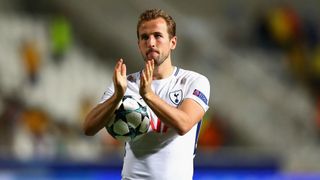 Jamie Redknapp believes Harry Kane is an obvious transfer target for Spanish and European champions Real Madrid, but feels the Tottenham star will stay put if he is paid similarly to Romelu Lukaku and Sergio Aguero.

Kane has been linked with Madrid and the England forward will have the chance to impress his potential suitors during Tuesday's Champions League showdown at the Santiago Bernabeu.

The two-time reigning Premier League Golden Boot winner has enjoyed another lethal start to the season, scoring 15 goals in all competitions for club and country, earning praise from Madrid head coach Zinedine Zidane – who branded Kane the "complete forward".

However, former Tottenham midfielder Redknapp does not see the need for Kane – under contract until 2022 after signing a new deal in December – to leave Spurs if he is rewarded financially.

"He is a long way past that [interest from Real Madrid], of course he is a target," Redknapp told Omnisport.

"But I think if Tottenham give him the money he wants and pay him like they should do, why would you want to go anywhere?

"He is playing with some good young players but the only problem is now the way the game has gone you need to be earning the big money.

"He should be on what Lukaku is on and [Manchester City forward] Aguero is on and all the best players in the world because he is up there with them."

A big test tomorrow against the holders. Looking forward to it. October 16, 2017

The 24-year-old netted 29 goals last term, four more than Lukaku, and former England international Redknapp expects the pair to fight it out again for goalscoring honours in 2017-18.

Redknapp said: "I do [expect Kane's form to continue] because he works so hard and is a master of his craft.

"You know he plays every single game and gives 100 percent and keeps fit and I think between him and [Romelu] Lukaku we will have a good race for the golden boot."