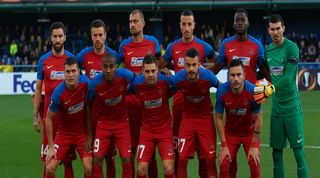 According to the Romanian FA, the 1986 European Cup winners have been using the name 'Steaua Bucharest' illegally because it actually belongs to the army side, and they want it back.

Why? To get more money for naming rights, of course.

As a result, the ministry took the club and its owner Gigi Becali to court to resolve the issue – and won.

David Beckham has shown off his horrifying new look on Instagram

The court ruled that the 26-time champions had been using the name illegally since 2004, and will begin using their new name on March 30.

It could have been worse – Becali initially thought of self-indulgently changing the club's name to FC Sports Becali.