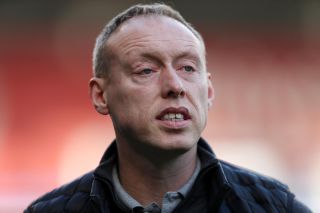 Steve Cooper bemoaned Swansea’s attacking play after his side failed to muster a single on-target effort in their goalless draw with QPR.

The Swans’ play-off prospects suffered another blow at the Liberty Stadium and Cooper’s side have taken only two points from their last four Sky Bet Championship games.

“It’s not for the ability we have in the team,” Cooper said of Swansea’s shot-shy performance.

“We know we can do better in the final third, but it wasn’t for a lack of trying.

“Our intention was to score, but QPR showed some resolute defending and we can do more in and around the box.

“We need a bit of confidence, a bit of risk-taking to make a difference.

Cooper has been regularly criticised by some sections of the Swansea support for a perceived reluctance to make substitutions in matches.

As the Swans struggled to make headway against opponents who had lost their four previous games, Cooper made just one this time – replacing Yan Dhanda with Aldo Kalulu after 74 minutes.

Asked if that might raise eyebrows, Cooper replied: “Maybe. But we thought we had the players on the pitch to get that goal.

“We had lots of conversations on the bench. I thought Yan was doing quite well, but he can run out of steam through lack of games.

“It wasn’t the ideal change bringing him off.

“We’ve seen this year some changes that have gone for us and some against us, and we live with it.”

Cooper confirmed that George Byers will miss the rest of the season with an ankle injury.

“He was scanned and it confirmed what the medics had initially thought,” Cooper said. “It rules him out for three months, which obviously keeps him out of the rest of the season.

“It’s a blow for him, and for us, and we need to support him during his recovery and getting him back during pre-season.”

QPR’s point was their first since beating Leeds on January 18 and boss Mark Warburton felt they deserved better.

“We should have been 2-0 up in 10 minutes, but we didn’t take our chances,” Warburton said.

“It’s a clean sheet which is pleasing, but we feel we’ve dropped two points.

“We saw a collective unity to defend our goal – and they’ve got quality throughout the ranks.

“Our shape was good and we stopped them playing. We need a clinical edge, but as long as we create chances we’ll be fine.”