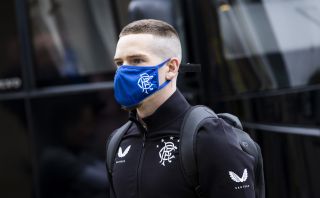 Rangers boss Steven Gerrard has issued a hands off warning to Leeds after confirming the Ibrox side have knocked back an opening £10million offer for Ryan Kent.

The Elland Road outfit are looking to strengthen ahead of their long-awaited Premier League return next month and have identified Kent as a key target.

The former Liverpool winger made a £7million switch to Glasgow last summer following a successful loan and has started the new campaign in sparkling form, scoring twice in his first four Scottish Premiership games.

But Gerrard is determined to keep hold of the 23-year-old and has warned Leeds he is not for sale.

“The message for sure is hands off,” said the Light Blues manager. “Ryan’s a player we admire very much. We saw him develop at Liverpool and brought him here, when he did ever so well on loan.

“We went and bought Ryan and showed a lot of faith in him and he’s progressing very, very quickly here.

“He’s in a good place and a player we want to keep hold of.

“But yes we have had contact from Leeds and an opening bid has been really strongly rejected.”

Gerrard knows Marcelo Bielsa will have cash to spend after guiding Leeds back to the Premier League but has refused to put a price tag on his star winger.

“They are way, way off with that opening bid,” he added. “That’s the truth and the reality. He’s a player who is not for sale.

“We do not want to lose Ryan. He’s a big part of what we’re trying to build here.

“We want him to stay for many, many years.

“But you know that Premier League teams hold a lot of power and that’s the reality. We have to accept that.

“But the message to Leeds is the opening bid is nowhere near the valuation and the player doesn’t really have one as we don’t want to sell.

“I’ve had a chat with Ryan. He’s fine and focused. He’s aware of the Leeds situation. But we just move forward day by day and hopefully it goes away. If it doesn’t we’ll deal with it.

“Ryan is available for tomorrow and is playing tomorrow (against Kilmarnock) . That’s my main focus right now.

“Ryan is very well liked here, he’s a fans’ favourite, so I think Leeds have to respect that. They’ve had a lot of interest in their main players. There’s been talk of Kalvin Phillips moving for many years – but that’s what Ryan means to us so they need to think really hard if they are going to come again.”

Gers saw their 100 per cent start to the new season slip with Sunday’s goalless draw at Livingston.

The laboured display sparked fresh alarm amongst an Ibrox faithful already fretting over Celtic’s bid for a 10th successive title.

But Gerrard hopes his team will be livelier when Killie visit Ibrox on Saturday.

He said: “The fans are well entitled to their opinion – but do I listen to them all? No. I focus on the reality. I think we’ve had a real strong start to the season.

“Yes it a frustrating result at Livi and I was a little disappointed in our quality in the final third on the day but it’s certainly no time to panic.

“We’re one goal away from a perfect start so I’m pretty content with where we are now.

“We have respect for Kilmarnock and have had some tough challenges against them in the past.

“But it’s been nice to have a full week to really focus on some things we weren’t pleased with at Livingston and hopefully we can put them right tomorrow.”