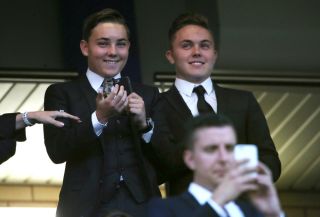 Jack Sullivan was 14 when he first asked his mother if they could buy the West Ham ladies team.

The teenage son of billionaire West Ham co-owner David Sullivan has had to grow up quickly, recruiting an entire new squad last summer as the club turned professional and entered the Women’s Super League.

Under manager Matt Beard the Hammers have not only secured a comfortable mid-table finish, they have also reached a first-ever Women’s FA Cup final, to the delight of Sullivan – and the documentary-makers.

Sullivan, who worked at the club in various roles from corporate sales to the ticket office since leaving school, said: “I’ve always been quite driven, if I’ve wanted to do something I go and do it. But I do think I’ve matured a lot.

“It’s been an interesting year, all the way back from the summer where we brought in 16 new players.

“When the FA gave us the green light to come into the top division we were over the moon.

“We wanted to get more eyeballs on women’s football and we hope we’ve done that. And in getting to the final hopefully the FA can say they made the right decision.”

"Manchester City will be hard, but it’s the FA Cup Final, and we all know that in cup games anything can happen." – @lehmann_alishahttps://t.co/3PcJb6dNJQ— West Ham United Women (@westhamwomen) May 2, 2019

In the past some fly-on-the-wall football documentaries have not painted their subjects in a particularly good light.

“It was a gamble,” Sullivan admits. “But the gamble paid off.

“We’re on BBC1 every Saturday night after Match of the Day and the viewing figures for that have been 1.3 million, which the BBC have been absolutely over the moon with.

“Supporters from all over are saying how brilliant it’s been to have that kind of access into women’s football. We believed in what we were doing. If what you’re doing is good, it’s not a problem.”

West Ham have developed a structured pathway for aspiring young women to go from grassroots football to their academy.

Such has been the surge in interest that some fans are planning to leave the men’s match against Southampton on Saturday at half-time in order to get across London and support the women at Wembley.

But West Ham are big underdogs, facing a Manchester City side unbeaten domestically all season and who thrashed them 7-1 in October.

A defeat would not take the shine off their achievements this season, though.

“So it’s an incredible way to cap off the year, and the documentary team are absolutely thrilled because they’ll have a fantastic ending.”

As for any post-match celebrations, Sullivan borrowed a phrase coined by former manager Harry Redknapp from his playing days at the club: “As they used to say here – win or lose, on the booze!”