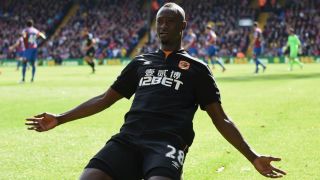 Sunderland have completed a deal to sign striker Dame N'Doye on loan until the end of the season.

The Senegal international moves to the Stadium of Light from Turkish side Trabzonspor, but will be unavailable for this weekend's Premier League trip to Tottenham as the formalities pertaining to his work visa need to be completed.

"Having already played in the Premier League [with Hull City] he should have no problems in hitting the ground running too, which is very important at this stage of the season."

N'Doye joined Hull from Lokomotiv Moscow in January of last year and scored five goals in 15 top-flight games for the Yorkshire club, but was unable to keep them in the Premier League and subsequently switched to Trabzonspor.

The 30-year-old's move to Turkey has not been a success, with the former Copenhagen forward netting once in 14 appearances for the Super Lig side.

Sunderland have struggled for goals for much of the season, although a Jermain Defoe hat-trick helped them to a 4-2 win at Swansea City on Wednesday.

Defoe's treble took his tally to nine league goals, but fellow forwards Fabio Borini, Steven Fletcher and Danny Graham have netted just six times in the top flight between them this term.

Victory at the Liberty Stadium moved Allardyce's men up to third bottom and a point behind 17th-placed Swansea.

Sunderland could move out of the bottom three with three points at White Hart Lane on Saturday.