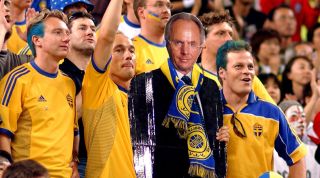 England went out to Brazil in the 2002 quarter-finals, while the latter two tournaments ended in penalty shootout defeats to Portugal.

Although Eriksson thinks England have a "great chance" of progressing to the semi-finals, he believes Sweden could prove an even harder test than the Seleção – previously, potential quarter-final opposition had the Three Lions won Group G.

Eriksson's home nation progressed to the last eight with three tournament clean sheets under their belt, and the 70-year-old thinks they will cause big problems in Samara.

"It would be easier for England to beat Brazil than to beat Sweden in my opinion," Eriksson told Paddy Power News.

"Sweden today are a very hard team to break down. Their strikers are defenders when it’s time to defend and they can defend in their own box as well. Their running, their commitment, their physical work is incredible.

"England have a great chance to make a World Cup semi-final. But if anyone in the squad thinks they have an easy game on Saturday, they’re wrong. It’ll be the most difficult game they’ll have played so far, they can bet on that.

"My brain says England, but my heart says Sweden."