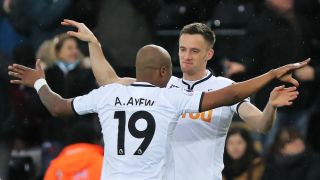 Andy King scored on his full debut as Swansea City bolstered their hopes of Premier League survival with a 4-1 thrashing of woeful West Ham.

The victory saw Carlos Carvalhal's side leapfrog the Hammers in the Premier League table and rise out of the relegation zone after a run of four wins from their last six games.

The visitors' afternoon quickly unravelled as Ki Sung-yueng opened the scoring inside eight minutes and defender Winston Reid was stretchered off before being taken to hospital with injuries to his knee and head.

Mike van der Hoorn doubled Swansea's lead before Leicester City loanee King struck early in the second half and David Moyes will have been furious to see his side concede two goals at corners.

Jordan Ayew heaped more misery on Moyes with a penalty after his brother Andre – making his first start for Swansea since rejoining the club from West Ham in January – was brought down by Cheikhou Kouyate.

Substitute Michail Antonio grabbed a late consolation but the result leaves West Ham with just one win from their last six games and serious defensive frailties - not helped by Reid's serious-looking injury - to address if they are to avoid the drop.

Both sides launched themselves into this crucial game at a high tempo but Swansea quickly took the wind out of West Ham's sails when Ki received Andre Ayew's lay-off, switched the ball to his left foot and drove a low shot into the bottom-right corner of the net after eight minutes.

West Ham were clinging on when Federico Fernandez shot from close range after a scramble in the penalty area and Declan Rice had to clear the ball off the line to keep his team in the contest.

The game was delayed for 10 minutes while Reid was treated and stretchered off having suffered a severely twisted knee and a bang to the head.

Following the restart Andre Ayew sought to inflict further misery when he arrowed a powerful strike towards goal, forcing a good save from Adrian.

And it was 2-0 just after the half-hour when Van der Hoorn scored his first goal of the season, heading Ki's corner into the net from close range after losing his marker.

West Ham looked brighter when they emerged for the second period but within three minutes their defence fell asleep at a set-piece, allowing King to poke home the rebound from Andre Ayew's saved header.

The visitors belatedly sparked into life as Marko Arnautovic received the ball on the edge of the box and executed a piece of skill that left two Swansea defenders on the floor, only to send a disappointing shot into the arms of Lukasz Fabianski.

Just after the hour mark, Swansea made it 4-0 from the penalty spot.

Andre Ayew was clumsily tripped in the box by Kouyate, and the striker's younger brother Jordan rifled the spot-kick into the bottom-left corner of the net.

With 11 minutes to go, Antonio collected a high ball inside the box and deftly turned before firing low past Fabianski, but it was far too little, too late for Moyes' men.

- Swansea City have won four consecutive Premier League matches on home soil for this first time since May 2016.
- This was West Ham's heaviest Premier League defeat against a side starting the day in the relegation zone since a 0-3 loss at Sheffield United in April 2007.
- West Ham have conceded 37 goals away from home in the Premier League so far this season, more than any other side in the competition.
- Swansea have scored 14 league goals in nine matches under Carlos Carvalhal, having scored just 11 in their previous 20 Premier League matches this season before his appointment.