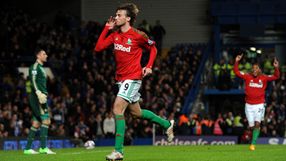 The European champions had the lion's share of possession at Stamford Bridge and were the victims of a classic smash-and-grab raid from Michael Laudrup's Swansea who scored twice through Spanish hot-shot Michu and substitute Danny Graham.

"The team was doing really well," Benitez told reporters. "We had a lot of chances and could have scored two or three in the first half, one or two in the second.

"We made two mistakes and paid for them. The way we played, the control we had, for me, is what we have to do. We have to be more clinical in front of goal and take these chances but we were doing a lot of things really well.

"If we played this game 10 times maybe we would win nine of them," the Spaniard added.

By the time the pair came on, in the 70th and 81st minute respectively, the jitters had got to the rest of the Chelsea players.

England midfielder Lampard, who according to his agent is certain to leave the club when his contract expires at the end of the season, was cheered by all corners of the ground whenever he rose from the bench for a warm-up.

"The team was creating chances," said Benitez. "We had 23 attempts [on goal] and a lot of clear attempts.

"We were doing a lot of good things but in football you have to take your chances."

Ba, who came on for the hugely disappointing Fernando Torres, had a stoppage-time goal ruled out for offside and the former Newcastle United striker could also have had a late penalty.

Benitez said Ba's goal should have stood but was less certain about the penalty claim.

Laudrup, by contrast, was all smiles after his Swansea side extended their excellent recent run to two defeats in 16 games in all competitions.

"We have already achieved some historic results this year," said the former Denmark playmaker. "But to win at the home of the European champions is fantastic.

"We knew we had to put on a good performance without the ball and try and get an important away goal as well. This is only the first half but I'm delighted with the result."

Swansea, sitting comfortably in mid-table in the Premier League, now have a place in next month's Wembley final firmly in their sights but Laudrup said they would be taking nothing for granted in the second leg against Chelsea on January 23.

"We are not there yet, we are very far away," he added. "We will need another great performance because Chelsea have so much offensive potential.

"They are capable of scoring two or three goals but we wanted a realistic possibility of reaching the final - now we have that."