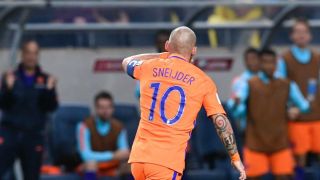 Wesley Sneijder reduced the pressure on Netherlands coach Danny Blind by salvaging a 1-1 draw for his side in Sweden in their opening World Cup qualifier in Group A.

Netherlands trailed at Solna's Friends Arena but battled back and the captain's goal spared the blushes of Blind, whose side failed to qualify for Euro 2016 and suffered a shock 2-1 friendly loss at home to Greece on Thursday.

The visitors had numerous chances in the first half but Davy Klaassen wasted two excellent opportunities and Netherlands fell behind just before half-time to a stunning goal.

Kevin Strootman was guilty of giving away possession in a dangerous area but Marcus Berg's finish was glorious, lifting the ball over the head of goalkeeper Jeroen Zoet from the edge of the box.

Sweden had appeared comfortable at the back but the Netherlands pressure eventually told, Sneijder finishing on the rebound after Robin Olsen saved from Daryl Janmaat.

Netherlands then looked to have snatched the points late on, only for referee Daniele Orasto to chalk Bas Dost's effort off for a foul.

Blind's men have a home double-header against Belarus and France next month, while Janne Andersson's Sweden travel to Luxembourg before hosting Belarus.

Netherlands were immediately on the front foot and almost took the lead in the sixth minute, Olsen denying Klaassen from close range after Strootman's superb chipped pass.

Klaassen had his side's next chance too, when a well-worked move created space for Janmaat on the right, but the unmarked midfielder planted his header straight at Olsen.

Zoet dived to his left to keep out a sharp Emil Forsberg drive from outside the box after 17 minutes as Sweden responded to the Dutch pressure, before the hosts' captain Andreas Granqvist blocked Vincent Janssen's goalbound volley.

Janssen's ambitious effort was then beaten away by Olsen and Sneijder saw a shot deflect narrowly wide with the goalkeeper helpless, and Netherlands' profligacy proved costly as Sweden went ahead against the run of play after 42 minutes.

Strootman dallied on the edge of his own area despite having multiple options and Berg robbed him before producing a sublime instinctive lofted finish over Zoet's head and in off the crossbar.

Klaassen had another opening shortly after the restart, this time from Quincy Promes' cross, but Olsen palmed away the header.

Olsen saved from Virgil van Dijk's header as Netherlands continued to carve Sweden apart, and Sneijder wasted another good opportunity by blazing over the crossbar.

But when the next chance fell to the Netherlands skipper after 66 minutes, he made no mistake.

Janmaat drove inside and tested Olsen with a firm shot from the edge of the area and the goalkeeper could only parry out for Sneijder to tuck a smart finish into the bottom-left corner.

Substitute Dost missed a fantastic chance with six minutes to go and Olsen saved Sniejder's drive as Blind's men threatened to score a winner, and they had the ball in the net as the clock struck 90.

Dost headed in a right-wing cross but Orsato felt the striker had fouled Victor Lindelof to get his head on the ball, denying the Dutch a morale-boosting turnaround.