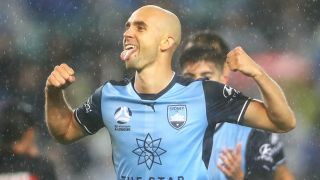 Sydney FC were dealt a double blow with confirmation stars Bobo and Adrian Mierzejewski are set for moves abroad.

Bobo, 33, is moving to a club in Turkey after two seasons with the Sky Blues, having scored 42 goals in 57 A-League games.

Last season's Golden Boot winner is joined by Mierzejewski in departing the premiers, the former Poland international heading to China.

Mierzejewski leaves Sydney after just one season, during which he won the Johnny Warren Medal as the A-League's player of the year.

"There's no doubt Bobo and Adrian had excellent seasons for us and we wanted both to stay, but it's part of football that players want to move on and seek fresh challenges and experiences for their family," Sydney head coach Steve Corica said.

"We have some very exciting targets who we are talking to and I'm looking forward to bringing in more quality to an already experienced and talented squad.

"We have a very solid base and the injection of new blood and some fresh faces will ensure the squad remains healthy and revitalised as we attempt to achieve even greater things this season."

Saturday's confirmation from Sydney came as Spain and Atletico Madrid great Fernando Torres was linked to the club, as well as champions Melbourne Victory.