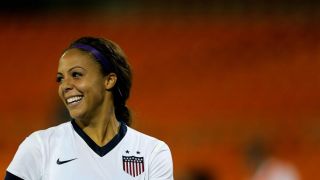 Sydney Leroux was the youngest player on the U.S. women's national soccer team at the 2012 Olympics, but she has bigger goals this summer than bringing home another gold medal.

Leroux announced Monday night that she and husband Dom Dwyer are expecting their first child later this year. An Instagram post by Dwyer, who plays in MLS for Sporting Kansas City, indicated the baby is due in September.

Leroux has 35 goals in 75 appearances for the U.S. national team, including a tally against New Zealand in the 2012 Olympic quarterfinals. Though the 25-year-old forward was mostly a supporting player in the run to the World Cup title last summer, her role was expected to expand in 2016 after the retirements of Abby Wambach and Lauren Holiday.

The U.S. will have to find Alex Morgan some help up front after those departures, especially if veteran midfielder Megan Rapinoe is unable to return in time from a torn ACL suffered last month.

"Although we are disappointed that Syd will not be playing for us this season, we are thrilled and excited for her and Dom," general manager Huw Williams said in a release. "Dealing with matters such as these is part of our business. All of us at FC Kansas City are 'family first' type of people so we see this as an exciting and joyous occasion."