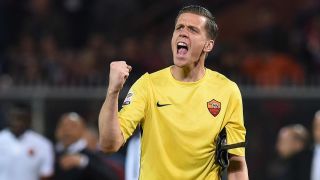 Wojciech Szczesny is yet to agree a deal with Juventus and will not do so before speaking to Arsenal manager Arsene Wenger, his agent insists.

Reports in Italy suggest the Italian champions, who face Real Madrid in the Champions League final on Saturday, have agreed to sign the goalkeeper for €16million on a four-year deal as they eye a long-term replacement for Gianluigi Buffon.

But Szczesny's agent David Manasseh has made it clear there is no agreement with Juve at this stage, with the Poland international yet to hold talks with Wenger.

"There is still no agreement with Juventus," David Manasseh said to Przeglad Sportowy.

"Szczesny has yet to talk with Wenger, who has been confirmed as Arsenal coach for the next two years."

The 27-year-old has spent the last two seasons on loan at Roma, who have also been linked with a permanent move for him along with fellow Serie A side Napoli.

Speaking last month, Szczesny made it clear that the desire of Arsenal, with whom he still has a year left on his contract, will be crucial in deciding his next move and felt the uncertainty over his future was becoming "draining".