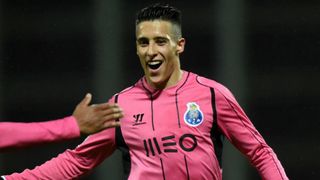 Cristian Tello has joined Fiorentina on loan until the end of the season after the Barcelona winger's temporary deal with Porto was rescinded.

Tello joined Porto for a two-year term in July 2014 and has played 33 games in his time at Estadio do Dragao, scoring eight goals.

However, he will now move to the Stadio Artemio Franchi to boost a Fiorentina side challenging for the Serie A title.

A Barcelona statement read: "FC Barcelona and ACF Fiorentina have reached an agreement for the loan of Cristian Tello until 30 June 2016, his current loan agreement until the end of the season with FC Porto is rescinded.

"With this new loan, ACF Fiorentina will take over the conditions of the agreement between FC Barcelona and FC Porto."

Fiorentina are fourth in the league, six points adrift of Napoli having lost three of their last five games in the Italian top flight.

Tello's arrival in Florence follows the signings of Mauro Zarate from West Ham and Tino Costa, who joined on loan from Russian side Spartak Moscow.

Fiorentina, who are six points off top spot after losing their last two matches, host Torino on Sunday.