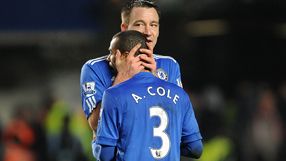 "He will not be able to play for England. He has a problem with his back and hopefully he will be ready for the next game," Chelsea manager Carlo Ancelotti said.

It will be the fourth successive England match Terry has missed and Everton's Phil Jagielka is likely to partner Rio Ferdinand at the heart of the England back line.

Cole played against Sunderland but pulled out of the England squad after the match. Bolton Wanderers defender Gary Cahill and Aston Villa full-back Stephen Warnock were called up as cover.

West Ham United striker Carlton Cole was earlier called into the squad due to fitness doubts over Newcastle United's Andy Carroll and Villa's Gabriel Agbonlahor who suffered injuries playing for their clubs over the weekend.

Carlton Cole won the last of his seven England caps as a substitute against Egypt at Wembley Stadium in March.