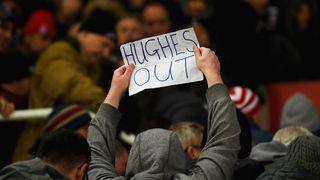 A furious Mark Hughes stormed out of his post-match news conference after Stoke City lost 1-0 against Newcastle United to pile further pressure on the Welshman.

Potters boss Hughes rested a string of key players at Chelsea on Saturday, where his side were hammered 5-0, with an eye on the New Year's Day clash with the Magpies, but they delivered a dismal performance and were undone by Ayoze Perez's second-half goal.

"Hughes out" signs were on show among sections of the home support at the bet365 Stadium as the final whistle blew and Stoke's manager appears to be under more pressure than ever with fan discontent growing.

He was quizzed on his selection at Stamford Bridge and offered a prickly defence of his decision, inviting a journalist to offer their thoughts on what he ought to have done, before getting up and swiftly leaving the room, as reporters attempted to get further questions in.

"I made the changes because I had four defenders fit, that's all I had, so that was the back four irrespective of what was in front," Hughes told reporters.

"I had eight internationals I think involved in that game, I had players who needed games.

"If we'd been closer in the second half I would've got guys who missed out, they would have played a part, as it was the game had gone away. That was the situation.

"What would you have done? You would’ve played two strong teams?

"I made the decision in the second half at Chelsea to say 'we can't win this game I will pick these players and look after them with a view well be stronger and better equipped to play a second game in 48 hours'.

"And I'm going to be criticised for that? I think it's unfair if I do."

Hughes' opposite number, Rafael Benitez, offered support to his beaten foe post-match, claiming to have seen suitable spirit from the Potters.

Benitez said: "I think he did what he thought was important for them, to play this game like a final.