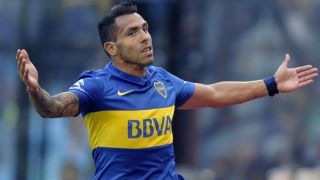 Carlos Tevez has turned down the chance to become West Ham's highest-paid player, instead demanding £250,000 a week to rejoin the Premier League outfit.

Tevez was offered £150,000 a week – plus bonuses – to become West Ham's newest signing, and was promised the role as first-choice striker at the Olympic Stadium.

However, Tevez – now plying his trade for Boca Juniors in his native Argentina – declined the offer, instead asking for an extra £100,000 a week.

"So how much love is that for West Ham? I actually offered him £150,000 a week to come back plus bonuses.

"I thought that was an incredible offer for someone who loves West Ham. And it was a huge gamble for us because he's 33 now and hasn't done it in South America.

"It wasn't a publicity stunt, I saw him being our number one striker. I was hoping he would reproduce what he did at Juventus a year ago. He was a fantastic player.

"But where do you draw the line with what you are prepared to pay?"

Tevez got his break in European football with West Ham in 2006 when they signed him from Brazilian club Corinthians, before the forward joined Manchester United on a two-year loan deal after one season.

After two years at Old Trafford, where he won back-to-back Premier League titles and a Champions League, Tevez joined cross-town rivals Manchester City for a reported £25million, helping them to the 2011-12 league title.

The 32-year-old is preparing to face Independiente del Valle in the first leg of their Copa Libertadores semi-final on Thursday.