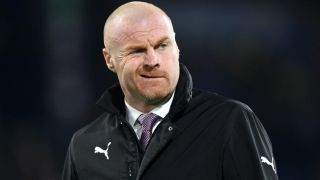 The Reds overturned a second-half deficit to triumph 3-1 on the road, though victory came at a cost as defender Joe Gomez suffered a fractured left leg during the first half.

The England international was injured following a challenge from Ben Mee, with Klopp claiming after the game he had spoken to referee Stuart Attwell about the danger of injuries in the face of the home side's physical approach to proceedings.

"I said after the first challenge, I don't know who did it, sliding tackle from six or seven yards, getting the ball, everybody likes it, I said to the ref 'it's no foul but please tell them you cannot do that'," the German said in his post-match news conference.

"Nobody can judge that. You get the ball, nice, but it's like bowling. Because you get the player as well.

"It happened four or five times, everybody likes it, but Joe is injured, and probably not only a little bit."

Liverpool confirmed on Thursday that Gomez is set to be out for up to six weeks, meaning he will miss Liverpool's pivotal Champions League fixture with Napoli next week, as well as the home clash with Manchester United.

Joe Gomez sustained a fracture to the lower left leg during last night's game against Burnley...December 6, 2018

Dyche sent his best wishes to the 21-year-old but insisted Mee had done nothing wrong. He also hit back at Klopp with reference to another first-half incident, suggesting his opposite number had failed to talk about Daniel Sturridge appearing to dive when winning a free-kick just outside Burnley's penalty area.

"I was a little confused. I couldn't make out what part of that was right and wrong," Dyche told the media. "What I would say is this, and I think it's important to register, there were some excellent tackles last night.

"I think the only one that was questionable was from Bardo [Phil Bardsley]. I think Ben Mee's was a fantastic tackle. I imagine a player who seems to be an honest player, in Gomez, realised that. That was the message we got after.

"We send him our best if any injury has occurred but it wasn't from a bad tackle.

"He [Klopp] didn't reference Daniel Sturridge's cheating when he went down, nothing near him, and he got a free-kick for it."

Dyche also made clear that Klopp appeared to be in a minority of one in thinking there was an issue over the struggling home side's approach to defending against a team sitting second in the table.

"Our lads went about their business terrifically last night and everyone else apart from the manager seemed to agree," he added.