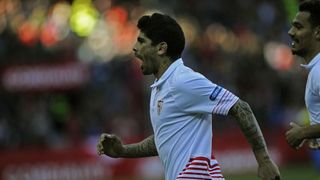 Ever Banega is one of the best midfielders in the world, according to Inter president Erick Thohir.

The Argentina international became the Serie A club's latest recruit on Wednesday, signing a three-year deal after calling time on his spell at Sevilla, where he won two Europa League titles.

And Thohir is confident coach Roberto Mancini has had a top-class player added to his ranks as the San Siro club seek to improve on last season's fourth-place finish.

"I'm delighted to welcome Ever Banega to Inter," read a statement from Thohir on Inter's website.

"He's an extremely talented player, one of the best in the world in his position, and he's shown that at Sevilla and with Argentina.

"He's a fighter who's used to winning – he's already won some of the biggest trophies in the game.

"I'm sure the Nerazzurri fans will offer him the sort of welcome that a star of his calibre deserves and that he will be a key member of the successful Inter side we're looking to build."

Banega started out at Boca Juniors in his homeland and first played in Europe for Valencia, with whom he won the Copa del Rey in 2008.