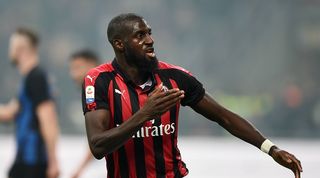 The former Monaco man has been a key figure for the Rossoneri this term, making 28 Serie A appearances as the seven-time European champions attempt to secure a return to the Champions League.

Bakayoko looked set to turn his temporary transfer into a permanent switch this summer, but he is now having second thoughts after being subjected to racist abuse in last week's Coppa Italia semi-final clash with Lazio.

Milan were readying a £30m bid to keep the midfielder at San Siro, but they will now have to look at other midfield targets after Bakayoko's change of heart.

Despite playing 43 games in all competitions, the one-cap France international struggled in his first season at Stamford Bridge following a £40m switch from Monaco.

He has impressed in a box-to-box role in Italy this term, though, but the 24-year-old's frustration at opposition supporters' racist abuse looks set to determine his future.