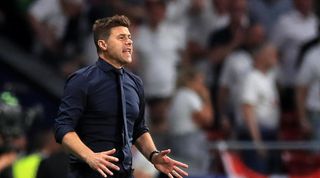 Mauricio Pochettino may be going through his toughest time as Spurs manager, but his predecessor is in no doubt that his job isn't under threat.

Speaking to talkSPORT, Tim Sherwood said: “Daniel Levy is one of the most astute men in football; do you think he in his right mind will sack Mauricio Pochettino?

“He has got so much credit in the bank with that football club. There is no way he will sack Mauricio Pochettino – not in a million years."

Sherwood went on to say that he doesn't believe Spurs are in as bad a period as people are suggesting, describing it as "a bump in the road".

However, Eric Dier was a little more forthright after the 3-0 defeat to Brighton at the weekend.

"We are obviously going through a difficult period. Is saying it's a crisis a bit too strong? No.

"If you lose like we've lost in these last two games, it's normal. For us, this is the worst period we've been in, but we have to be all together and push through it."

Dier also went on to play down talk of rifts in the squad.

"The stuff about the squad, I know that's not the case," he said. "But it's natural these things will come up now because of the situation we find ourselves in.

"It's the first time that we've found ourselves in this position, we can't back down from it. We've got to push through it."

Another Spurs midfielder, Harry Winks, has also come out in support of their boss, declaring: "He's been fantastic ever since he's been at the club and taken the club to new heights."