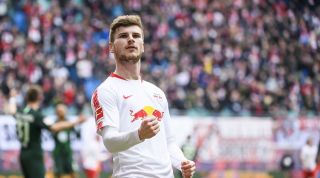 The Germany international has been heavily linked with a move to Anfield in the past and Jurgen Klopp could renew his interest in the striker in the coming months.

Werner, who has scored 16 goals in 30 Bundesliga appearances this season, is out of contract in June 2020.

And although Bayern Munich are thought to be keen on the former Stuttgart frontman, Mintzlaff has hinted that he could shun the Bavarians' interest.

"The situation is still the same. Timo Werner would rather not sign an extension," he said.

"But that could change. I don’t think it’s completely out of the question that he could extend his deal. We haven’t talked to Bayern Munich about Timo Werner yet.

"Maybe he doesn’t even want to go to Munich. Maybe he would rather join [Thomas] Tuchel in Paris, [Jurgen] Klopp at Liverpool or [Lucien] Favre at Dortmund."

Liverpool will turn their attention to the Champions League final after concluding their Premier League campaign with a 2-0 victory over Wolves on Sunday.