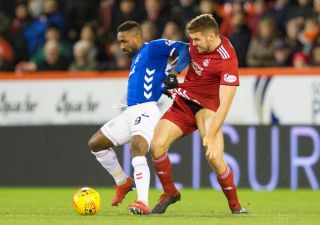 Aberdeen players savoured their long-awaited victory over St Johnstone following a difficult few weeks but none would have enjoyed it as much as Tommie Hoban.

While Aberdeen had three games postponed after a Covid-19 outbreak followed their opening Scottish Premiership defeat by Rangers, Hoban had not played for 18 months before helping the Dons to a 1-0 victory over St Johnstone on Thursday.

The defender suffered cruciate ligament damage while playing on loan for Aberdeen from Watford in February 2019, the latest blow in a career that has been undermined by serious injury problems.

The 26-year-old feared his time in football was over during lockdown but he signed a short-term deal with the Dons after being invited to complete his rehabilitation in Aberdeen and helped snuff out St Johnstone on his comeback.

“I have played a lot of games but it’s been 18 months so I had to remember how to do it,” the centre-back said.

“There’s always nerves before games. I was nervous but at the same time I was excited.

“Three months ago I literally had no idea if I was going to get back so I just tried to enjoy it and that’s what I am going to do for every game now. Because once you have that feeling that it’s possibly over, it definitely does make you appreciate the opportunity.

“There’s nothing better as a defender than getting a clean sheet and hearing that final whistle. That is the reason why we play the game and that’s the feeling we want to have every week.

“Not having it for a long time makes it feel even more special.”

Hoban, who played 57 times for Watford, added: “It’s been a very long road. Three months ago I had no idea if I even was going to get back. The phone was quiet, I didn’t have too many opportunities, and being out for so long you start to wonder was there going to be something. And I still wasn’t feeling great fitness wise.

“I was definitely starting to think about other options for post-football careers, there were a few things I was thinking of studying.

“But Aberdeen gave me the opportunity and I can’t thank them enough. The physio team have got me fit and I am just delighted to be back out on the pitch and more importantly get three points.

“Hopefully I can really kick on this time, stay injury-free and have a great season with the team.”

Hoban got his chance with Scott McKenna unavailable following a period of self-isolation, although the Scotland defender is set to return against Livingston on Sunday.

McKenna was one of eight Dons players whose night out led to two positive tests, three postponed games and major criticism from First Minister Nicola Sturgeon and many others.

“It’s been a very tough couple of weeks for the whole squad,” Hoban said.

“There haven’t been many players in the changing room and a lot of young boys training, which is good for them.

“It’s been very challenging circumstances going into the game but I think we showed the character and attitude of the boys.

“We stayed focused, kept our heads down and let everyone say what they are going to say in the papers.

“Our job is to go out there and perform on the pitch and as the game went on we grew into it.”