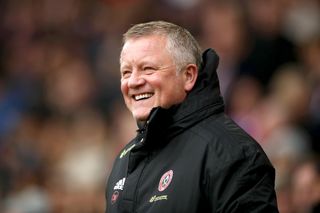 Premier League teams made over seven changes to their teams on average as the FA Cup third round followed a hectic festive programme.

With Arsenal still to play, only Everton, Tottenham and West Ham have so far made fewer than five.

Premier League managers have been critical of the fixture schedule across the Christmas and New Year period, with several teams forced to play games only two days apart. The round of fixtures on December 28 and 29 saw Leicester make nine changes and Brighton and West Ham seven apiece.

One of the strongest critics, Newcastle boss Steve Bruce, made only five changes for his side’s cup trip to League One Rochdale – though, with 10 players injured including three full-backs, his options were limited.

The Blades, though, gave debuts to goalkeeper Michael Verrips and new signing Jack Rodwell against non-league AFC Fylde and included two players, Kieran Freeman and Kean Bryan, who have yet to play a minute of Premier League football. Ravel Morrison and goalscorer Leon Clarke have played just 12 and 13 minutes respectively in the league.

Verrips was injured before half-time, meaning an unscheduled outing for regular keeper Dean Henderson, while Chris Basham replaced Rodwell just before the hour mark, but it was nevertheless a chance for manager Chris Wilder to give his first-choice XI a breather.

James Ward-Prowse was the only Southampton player to retain his place from the win over Tottenham, while Leicester kept only full-back Ben Chilwell in the line-up from their league win over the Magpies.

An Everton side showing just two changes – Morgan Schneiderlin and Theo Walcott replacing Tom Davies and the injured Fabian Delph – went down 1-0 to Liverpool as Curtis Jones scored a stunning winner for an inexperienced Reds side with nine players switched.

Just 2 changes for @Everton with @theowalcott and @SchneiderlinMo4 in for Davies and Delph— Carl Markham (@carlmarkham) January 5, 2020

The Toffees made the fewest changes of any side, one fewer than Tottenham and West Ham, while Wolves and Crystal Palace matched Newcastle’s tally of five.

The remaining 10 top-flight teams in action across Saturday and Sunday made either seven, eight or nine changes. The Gunners complete the third-round programme, replays excluded, when they take on Leeds on Monday evening.