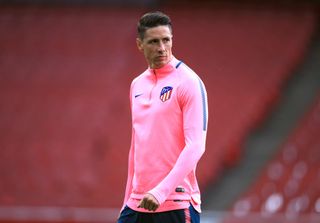 Fernando Torres singled out former team-mate Steven Gerrard as the best player he has played with as he announced he will hang up his boots in August.

The former Liverpool and Chelsea striker, who has been playing in Japan for Sagan Tosu since leaving Atletico Madrid last year, held a press conference in Tokyo to explain his decision to retire from the game after an 18-year career.

The 35-year-old said he wanted to leave football with a “clear conscience” and before he felt he could not carry on mentally or physically in the game he loves.

“I have a high demand for myself,” he said.

Asked who had made the biggest impression during his career, the Spaniard, who played at Anfield between 2007-2011, did not hesitate to name his former captain.

“I always say the best player I played with is Steven Gerrard. I found he was the player who completed my game. I think my level got into a different dimension when I was on the pitch with him.

“It was an amazing three-and-a-half years playing alongside Steven and I would love to go back to those days – even for one minute.”

My last professional match will be on August 23rd against @visselkobe . It will be very emotional to say good bye to football next to my friends @andresiniesta8 and @Guaje7Villa .Let’s enjoy this last two months . pic.twitter.com/BTiyWmrZY9— Fernando Torres (@Torres) June 23, 2019

Torres revealed he will play his last game on August 23 against Vissel Kobe, saying playing against friends Andres Iniesta and David Villa seemed a fitting end.

“To say goodbye to football next to my dear friend Iniesta is something I could never imagine, and Japan is going to make it possible.

“Also there will be my friend David Villa, with who I probably share the best moments in Spanish football history.

“So to say goodbye to football next to two very good friends – we share too many memories together – will be something great.

“I tried to find an iconic moment to play my final game and I think that is the perfect timing.”

Torres also spoke of his next steps and his desire to connect with Atletico Madrid in the future.

“I don’t know if it will be coaching or managing. I will study both things.

“I’m sure it will be something related to football because it’s been my life and it’s where I think I can offer more things.”

Speaking of his hometown club, Torres added: “Atletico Madrid is my life, so probably we will connect some way in the future but not immediately.

“I will not be back to just be a face… if I go back it will be for big things, to take the club to the next level.

“That needs time. I don’t have the experience, the knowledge of managing, I need time to prepare myself for the biggest challenge.”

Torres scored 81 goals across four seasons with Liverpool and won the Champions League, Europa League and FA Cup with Chelsea.