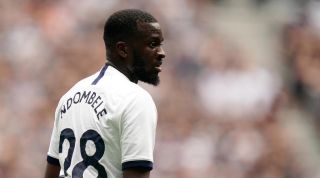 Tanguy Ndombele has told Jose Mourinho he no longer wishes to play for the Tottenham boss.

Ndombele has endured a difficult relationship with his manager since Mourinho was appointed as Mauricio Pochettino's successor in November.

The Portuguese labelled Ndombele's performance against Burnley in March "disappointing" - and the midfielder has not played since.

Premier League managers have been able to use up to five substitutes since the season resumed last week.

Yet Mourinho has still not found space for Ndombele in his team, with the club-record signing left on the bench against both Manchester United and West Ham.

Mourinho played down suggestions that he had fallen out with the 23-year-old after Tuesday's 2-0 victory over the Hammers.

“Sometimes I apologise to my players that are not my first choice because I feel their work in training deserves something more than I give but I have to do my job the best I can and I felt for these two matches I didn’t need him.”

But according to Telefoot, Ndombele has informed Mourinho that he does not want to play under him again.

Several of his team-mates attempted to mediate, but the relationship between the pair has reportedly broken down.

That poses a significant headache for chairman Daniel Levy, who sanctioned a £55m transfer fee to sign Ndombele last summer.

The former Lyon man is under contract at the Tottenham Hotspur Stadium until 2025.