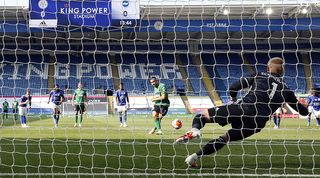 It was a long, drab three and a half months without football – so long, in fact, that Brendan Rodgers felt the need to remind his Leicester City players of what was at stake when they finally returned to action at the weekend.

“Amid the training and the pandemic, I felt the sense of excitement of what we could achieve could get diluted – so it was a reminder,” he told press on Monday, days after an unconvincing 1-1 draw at Watford in which his side had scored a 90th-minute opener and then conceded in injury time.

Something just isn’t right. Tuesday evening’s goalless draw against Brighton was another point and a clean sheet, but for much of it, Leicester’s performance was reminiscent of a Sideshow Bob rake scene: repetitive, predictable, self-inflicted pain. They were far improved in the second half, but that wasn’t particularly difficult after a pitiful opening 45 minutes in which Seagulls goalkeeper Mat Ryan’s greatest danger was himself. It could have been worse for the hosts, mind: at the other end, Kasper Schmeichel saved early blushes by stopping Neal Maupay’s weak spot-kick – his second such save in a row.

But this isn’t a new thing. Neutrals have more or less accepted Leicester as top-four certs for a large chunk of the campaign, backed up by their constant position there since the sixth game of the season. Scratch beneath the surface, however, and a more troubling reality emerges: since mid-January, Rodgers’ side have now won only two of their last 10 Premier League matches and don’t exactly look like improving that record either.

Most worryingly for Rodgers is that Leicester have genuinely struggled in that timeframe too, scuppering their chances of a first Wembley final since 2000 by losing to Aston Villa in the League Cup semi-finals and going down to league defeats against Norwich, Burnley and Southampton – the same side they’d obliterated 9-0 earlier in the campaign. Back then, Rodgers’ side looked capable of taking on any team with their ferocious intensity and class from front to back, but this isn’t the same side. Quite what has happened in the intervening months is something of a mystery; Rodgers has offered a cool head throughout, but even he must be scratching his head watching his lions continue to act like lambs. In seven of their last 13 games, the Foxes have dropped points in the last 20 minutes of matches.

Brighton at home – on paper, at least – looked like their easiest game of the campaign remaining: with seven games to go, they are still to face Everton, Crystal Palace, Arsenal, Bournemouth, Sheffield United, Tottenham and what could be a significant final-day clash against Manchester United.

SEE ALSO Premier League live streams: How to watch every game on this week

Unlike earlier in the campaign, however, Leicester’s challengers aren’t wilting like spinach on a bonfire. United saw off rivals Manchester City before the coronavirus-enforced break, and looked far sharper than Tottenham when the two sides faced off last Friday. With a particularly kind run coming up, Ole Gunnar Solskjaer may well feel quietly confident of his side’s chances of overthrowing Chelsea or Leicester in the run-in. Wolves, too, appear to have hit their stride at the right time: Saturday’s 2-0 win at West Ham dragged them level on points with United – their third win in five – while they too have relatively promising fixtures up ahead.

This may yet be another phenomenal year in Leicester’s history – still favourites for a top-four finish, still an FA Cup quarter-final to come against Chelsea this weekend – but they’re not close to being there yet. On this evidence, current form may not be enough for them to limp through to the end unscathed.

As ever, though, perhaps the best reality check come from their manager. As Rodgers concluded on Monday: “We can still write our own history. That is what we’ve been trying to do since we’ve been in here: how we play, creating records, and we’ve got an unbelievable opportunity this year to go and do it again.

“We’ll never beat that story back in 2016, but if we can keep getting better year on year and reach a cup final, then there is a really exciting period ahead of us.”

Hopefully for his sake, more exciting than a weak goalless draw at home to Brighton.