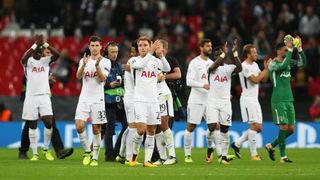 Former Germany striker Karl-Heinz Riedle believes Tottenham are currently one of the best teams in Europe.

Riedle's old club Borussia Dortmund fell foul of the Premier League side in their Champions League opener and are up against it in Group H after losing to Real Madrid by the same 3-1 scoreline.

Dortmund can get their campaign back on track with the first of two consecutive matches against APOEL on Tuesday but Riedle feels the Bundesliga leaders' struggles are not unexpected given the calibre of opposition.

"Okay, this season they started very well with the Bundesliga, just like we did in our times, but in the Champions League we had some problems," Riedle, who scored twice in Dortmund's 1997 final win over Juventus, told Omnisport.

"If you have two teams that are really on top-class… Tottenham at the moment has one of the best teams in Europe, so you can lose there.

"It’s not nice, but you can lose, and Real Madrid are always the same thing. You need to be absolutely on.

"Losing against these two teams is possible. It wasn't on our list, but there's still a lot of games coming up.

"We need to perform now against Nicosia, and then for sure we have to beat Tottenham clearly at home to have a last chance, and maybe to draw with Real Madrid."

Dortmund suffered their first Bundesliga defeat under Peter Bosz at the weekend, going down 3-2 at home to RB Leipzig.