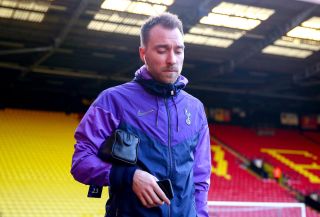 The 27-year-old travelled to Italy on Monday for a medical and has agreed terms on a four-and-a-half-year contract.

His £17million move brings to an end a glittering six-and-a-half-year career at Spurs where he was one of the driving forces behind their ascent to the top of the English game under Mauricio Pochettino.

Spurs will see it as a good piece of business, having got a sizeable fee for a player whose contract was expiring in the summer and would have left for free.

Tottenham were not prepared to allow Eriksen’s departure to be their main story of the day as the club simultaneously announced they had triggered the option to turn Giovani Lo Celso’s loan into a permanent deal.

The Argentinian, seen as a natural replacement for Eriksen, has joined from Real Betis for £27.2million on a deal until 2025.

A Spurs statement read: “We are delighted to announce that we have exercised the option to convert the loan of Giovani Lo Celso from Real Betis Balompie to a permanent transfer.

“The midfielder has produced impressive performances after establishing himself in the team following a hip injury which restricted his playing time in the early part of his loan at the club.”

Spurs would have had to pay £34million to make Lo Celso’s deal permanent in the summer, which was obligatory if they finished in the top four.

After a slow start to life in north London, the 23-year-old has shown glimpses of his potential in recent weeks.

On Saturday, following his role in Spurs’ 1-1 FA Cup draw at Southampton, boss Jose Mourinho said his form had given Spurs “no choice but to execute the option”.

There was less fanfare around the departure of Eriksen, who leaves having scored 69 goals and provided 89 assists in 305 appearances.

“The club can also confirm the departure of Christian Eriksen after agreement was reached with FC Internazionale Milano for the Denmark international’s transfer,” they added.

“We wish Christian well for the future.”

Eriksen’s switch to Milan completes a saga that has been going on ever since he stated his intention to leave Spurs last June, citing his desire for a new challenge following last season’s Champions League final loss.

He turned down the chance to join Manchester United and went unsold in the summer transfer window.

His form this season as a consequence has been a shadow of the one which saw Real Madrid and Barcelona once covet his signature – and the team’s results have also suffered.

New boss Mourinho was informed not long after his November appointment by the Denmark international that he would not be signing a new contract and that he wanted to leave this month.

Mourinho continued to play him, much to the annoyance of fans who believed his desire to move was affecting his commitment.

Inter offered him a way out, more than doubling his wages, but the Italian club’s behaviour this month angered Mourinho.

The Portuguese complained when Inter manager Antonio Conte publicly spoke about Eriksen and was also annoyed that the deal was dragged out to the latter part of the window.

Despite an unsavoury end to his Spurs career, the Dane will be remembered as one of their greatest players in the Premier League era.

Combining with the likes of Harry Kane, Dele Alli and Son Heung-min, he was at the forefront of Spurs’ rise under Pochettino, though will be disappointed he leaves north London without winning silverware.

His departure means that only Erik Lamela now remains of the ‘Magnificent Seven’ – the players Andre Villa-Boas bought in 2013 with the money received for Gareth Bale.

He might only have to wait a few months for silverware in Italy as Inter, who have also signed Ashley Young and Victor Moses this month, are in the title race for Serie A, three points behind Juventus.

Spurs are expected to do further business after agreeing a £25million deal for PSV Eindhoven winger Steven Bergwijn.

Bergwijn missed PSV’s game with FC Twente on Thursday in order to travel to London where he will undergo a medical and discuss personal terms.

Their pursuit of the Holland international, who is expected to go to Euro 2020, will not deter from the desire to bring a striker in before the end of the window.