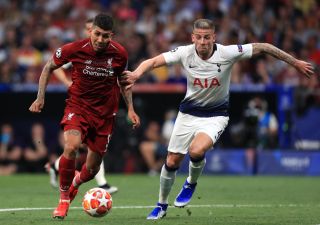 Toby Alderweireld wants Tottenham’s run to the Champions League final to be the starting point of a journey, not the end of one.

Spurs’ biggest ever game ended in misery in Madrid as they were beaten 2-0 by Liverpool in a match where they did not show their best.

Before the clash, boss Mauricio Pochettino had said that the game represented the end of a five-year chapter and there is a sense that the group could break up this summer.

Alderweireld himself is one of those players who seems certain to leave, having just one year left on his contract and a £25million release clause.

But the Belgium international is still talking about the future of the club, which could raise hopes he will be around next term.

“You see we are improving,” he said. “We have a new stadium behind us now and we have a young group. A group who can still improve.

“This experience we will take as well for next season and we have to go again.

“We are going to think like this in the next couple of days or weeks. Of course everybody is very disappointed but we have to look at it like that.

“It’s the next step that we have taken and now we have to keep going. Not think, ‘Oh we are happy with the final and maybe in a couple of years (we’ll be back)’.

“No, no. Next year we want to be here again. That’s the mentality, the philosophy we have in this group.

Midfielder Harry Winks, who made his first appearance since April following a groin injury, has faith Tottenham can win the Champions League in the future, but says their run to the final this year is an achievement bigger than winning silverware.

“People say we need to win a trophy and we need to do this or that, but what we have achieved is greater than that,” he said.

“It just shows how much the manager has taken this club to a new level and how much he has taken the players to the next level.

“We are so thankful for what he has done at the club. Everybody is now immensely proud of the squad and the club that we are now.

“We want to win the Champions League. We are more than capable of doing that and we have shown tonight that we are up there with Europe’s best.”

Spurs had only been to the quarter-finals of the Champions League once before this season, but their steady improvement under Pochettino is promising to Winks.

“Every year in the Champions League we have decided to build on it. We’ve looked to learn from our mistakes and learn our lessons,” Winks added.

“Next season that is going to be something we are going to try to do as well.

“We have got so much ambition and talent in the squad that we believe we can go all the way and win it.

“To get to the Champions League final, there are a lot of lessons to be learned and in the pre-season we will sit down and dissect the game and learn from our mistakes – but right now there is a lot of emotion.”