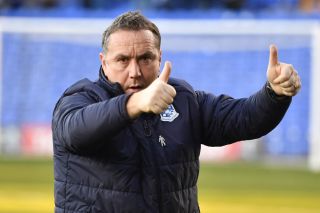 Tranmere boss Micky Mellon refuses to be seduced by the tantalising prospect of facing Manchester United in the FA Cup, urging his side to focus on the sizeable challenge of Watford.

Rovers battled back from 3-0 down at Vicarage Road to claim a 3-3 draw and ensure a third-round replay at Prenton Park, where they will welcome Ole Gunnar Solskjaer’s side this weekend if they upset the odds against the Hornets.

In the League One side’s favour is that this will be Watford’s third game in the space of six days and manager Nigel Pearson may opt to make changes with his side battling to preserve their Premier League status.

However, Mellon argued that whoever takes to the field in a tie that was rescheduled for Thursday because of a waterlogged pitch last week will be no pushovers.

Mellon said: “They’re a very good side, regardless of whoever that’s going to play. At the end of the day, the 11 that they bring in, they’re 11 Premier League players.

“You don’t get that opportunity every week. You obviously know they have a lot of qualities but what you’ve got to believe is they’re human beings and on any given day, it just might be your day.

“To be able to go out and play a Premier League team at Prenton Park underneath the floodlights should be very exciting for us.

⚽️ The winner of our @EmiratesFACup third round replay against @WatfordFC will face @ManUtd at home in the fourth round of the competition! #TRFC#SWA#FACuphttps://t.co/kjq3BHkmzd— Tranmere Rovers FC (@TranmereRovers) January 15, 2020

“We all know the prize, for us that’s massive. (For) Watford, it may not be because they’re in the same league. But for us the opportunity to be able to go and grab that, no more motivation should be needed.

“But you can’t affect who you have in the next round, you’ve got a job to do in that moment. Something that you encourage a team to focus on is the now.”

But in a remarkable second-half turnaround, Connor Jennings and Manny Monthe narrowed the deficit before Paul Mullin held his nerve to level from the penalty spot three minutes from time.

Mellon is adamant the result will have no bearing on Thursday’s meeting, adding: “At the end of the day, it’s an FA Cup tie, any team that Watford bring will try to win. That’s definitely one thing that won’t change.

“They’re a Premier League team so we have to respect that and everybody else has to respect that. All we can do is take care of ourselves. We won’t be looking at them thinking we have any advantage from anything.”