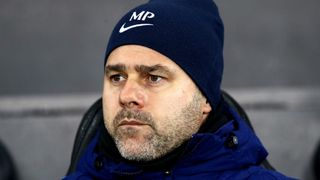 Mauricio Pochettino is the latest Premier League manager to complain about a hectic festive fixture list as his side prepare for a third game in the space of six days.

Manchester City boss Pep Guardiola and his Manchester United counterpart Jose Mourinho have both been highly critical of this season's scheduling, with extra games packed into the Christmas period due to the 2018 World Cup.

Although Spurs had a week between league games against Southampton and Swansea City, they then faced West Ham at Wembley 48 hours after a 2-0 win at the Liberty Stadium.

Pochettino's side will be in action again on Sunday as they host AFC Wimbledon in the third round of the FA Cup, leading the Argentinian to hail his team's physical efforts.

"For me, it's impossible to play in 48 hours again," Pochettino said. "That is why I am so happy and serve a lot of praise [to the players].

"To play here in England is so tough, to be a player here is so, so tough. For me, it is difficult to play here and the effort is amazing.

"We have to assess the players because a lot of the players played 90 minutes at Swansea and then again against West Ham.

"We have three days to recover but the effort for some players can be tough. So of course, we are going to make some changes."

Your December Goal of the Month, courtesy of January 5, 2018

Having seen Spurs scramble to a dramatic 4-3 win at home to League Two side Wycombe Wanderers in the fourth round of last season's FA Cup, Pochettino - yet to win a trophy as a manager - is taking nothing for granted ahead of the visit of third-tier side Wimbledon.

"The FA Cup is always a special game, it's a special competition," Pochettino added. "They are competing in League One, but we still have to play.

"I remember last season when we played Wycombe and it was so difficult, we won 4-3, so it will be tough on Sunday.

"It's one chance more [to win a trophy]. For a club like Tottenham, to be consistent in the top four, fighting for the Champions League and the Premier League is so important for us. Of course, the EFL Cup and FA Cup are important. If we can, we are going to win.

"We want to win trophies but it is so important to be consistent in the Premier League and in the Champions League, which is such an important competition for the club."