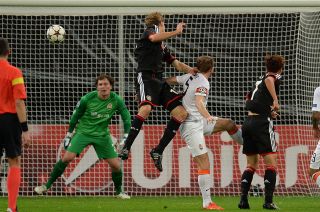 Kiessling had been at the centre of controversy with a 'ghost goal' in his side's Bundesliga win over Hoffenheim last week, but there was no doubt about his strikes on Wednesday as he headed the Germans in front midway through the first half, before Simon Rolfes slotted home from the spot just after the break.

Sidney Sam added a third with a well-taken finish, before Kiessling poked home his second of the night with 18 minutes left to confirm the win.

The result extends Leverkusen's unbeaten run at home in the Champions League group stages to eight games, and leaves them just a point behind Group A leaders Manchester United.

Leverkusen coach Sami Hyypia made four changes to the side that beat Hoffenheim, with Emir Spahic, Giulio Donati, Emre Can and Son Heung-Min all handed starts. Lars Bender missed out with a thigh injury.

The visitors, who travelled to Germany on the back of a seven-game unbeaten run, made two changes, welcoming back captain Darijo Srna while Tomas Hubschman was preferred to Taras Stepanenko.

Leverkusen made the more encouraging start, with first Rolfes and then Sam testing Andriy Pyatov within the opening 10 minutes.

Much had been made of Shakhtar's attacking threat, but the visitors struggled to find to find any sort of rhythm during the early exchanges, although the hosts breathed a sigh of relief when Yaroslav Rakitsky sent an early free-kick just wide of the post.

Leverkusen continued to have the upper hand in the centre of the park, and they were rewarded for their efforts after 23 minutes when Kiessling rose brilliantly to meet Donati's whipped cross and head his side into the lead.

The in-form striker should have doubled his tally just before half-time, but could he not keep his header down this time.

Shakhtar were nearly level just a few seconds later when Alex Teixeira raced away from the defence before lashing his shot into the side-netting.

Leverkusen continued to press, though, and they increased their lead six minutes after the break when captain Rolfes slotted home from the spot, after Kiessling had been brought down by Srna.

Things soon got even better for the hosts when some slack defending allowed Sam to beat the offside trap and calmly slot home for his 11th goal in 15 games.

Shakhtar substitute Bernard should have found the net 10 minutes later, but he could not connect with Douglas Costa's low cross.

Kiessling continued to cause problems, and he was soon rewarded again for his fine performance 18 minutes from time, pouncing on a mistake by Pyatov to score from close range.

The hosts could have had a fifth late on, with both Can and Sam missing good opportunities, on what was otherwise a fantastic night for Hyypia's men.