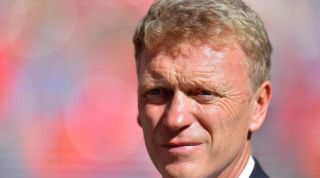 The Old Trafford outfit head into Tuesday's encounter against the Germans ready to compete at the business end of the Champions League for an 18th successive season, and with their sights set on a fourth title.

But although it is business as usual for the Premier League champions, the match represents new territory for Moyes.

He has taken on the toughest of tasks after replacing Alex Ferguson in the Old Trafford dugout, the veteran Scot having retired after guiding United to Champions League success twice, firstly in 1999 and then in 2008.

Ferguson could not make it a hat-trick of titles last season as they were knocked out in the Round of 16 by Real Madrid, but Moyes still faces a huge challenge to emulate the achievements of his predecessor.

And he will start his bid with very little European experience to draw on, having only enjoyed the briefest of forays into the competition in the past when his Everton side were knocked out of the third qualifying round by Manuel Pellegrini's Villarreal in 2005.

If he is to make a flying start this year, he must reverse an underwhelming home run in Europe that has seen United win only three of their last nine matches on their own patch, although they have only ever lost twice at Old Trafford against German opposition in 12 encounters.

In terms of his selection plans, Moyes faces a dilemma over the fitness of Wayne Rooney, after the England striker played the full 90 minutes of United’s 2-0 win against Crystal Palace on Saturday wearing a special headband to protect a head wound that ruled him out of international duty.

Meanwhile, in the opposing dugout on Tuesday will be a fellow rookie in the competition in the shape of Sami Hyypia, a former player of United’s Premier League rivals Liverpool and a winner of this trophy as a player with the Anfield club back in 2005.

He was part of the side, led by Rafael Benitez, that came from 3-0 down to beat Milan on penalties.

Since Leverkusen last played United in 2002-03 they have only qualified for the group stage twice and on both occasions they progressed to the last 16.

However, they make the journey to Old Trafford having never won in the country after two draws and six losses on English soil.

While United only added Marouane Fellaini to their first-team squad as the transfer window slammed shut, Leverkusen made no fewer than 10 additions to the group available to Hyypia, while a further 13 players departed during a busy close-season.

Their new-look squad appears to have gelled well as they sit in third place in the Bundesliga after five matches, with Hyypia once again likely to look to in-form duo Sidney Sam and Stefan Kiessling to lead their charge, with both having scored four times already this campaign - including in Saturday's 3-1 win over Wolfsburg.